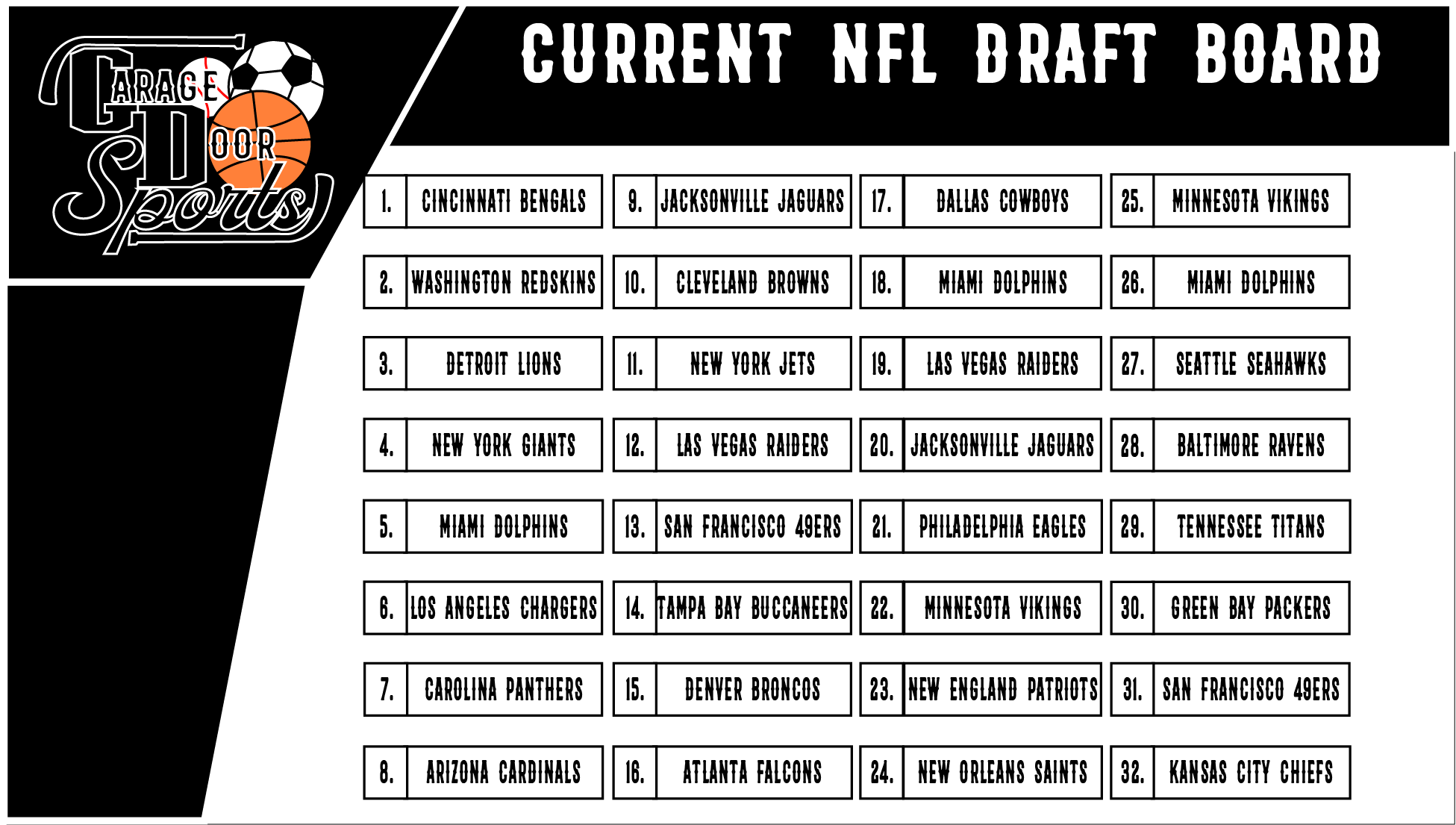 With the draft less than a week away the team at Garage Door Sports wanted to create a 2020 NFL Mock Draft with the thoughts of host Kyle Varty and those of our colleagues Hayley McGoldrick, Jordan McDonald and Wade Zanchetta on the first round.

*All picks were in before Friday April 17th.*

This answer seems too obvious at this point. Burrow is definitely the best QB in this draft class and with the Bengals having Joe Mixon, Tyler Boyd and AJ Green already in place he could be in for a successful season. – Varty

Ron Rivera grabs the best player available who will make an instant impact in D.C. – Zanchetta

Head coach Matt Patricia comes from the Belichick-ian school of thought that coverage is key to winning. And since the Lions traded away mercurial CB Darius Slay to the Eagles, they have a massive hole at the position that cannot be filled with just Desmond Trufant. – McDonald

New York really has too many problems to fix with one player, but at least getting Jeudy in at WR fills a void left by Odell Beckham Jr. when Eli Manning couldn’t hit the wide side of a barnyard. Out of all the recievers available he’s my personal pick despite the numbers that C.J. Henderson or Henry Ruggs III put up. Jeudy will put up those Dez Bryant caliber drop stats.- McGoldrick

The durability questions remain but Tua possesses the higher ceiling between him and Justin Herbert. Plus, the Dolphins can afford to let him sit and wait as he fully acclimates into becoming an NFL quarterback. – McDonald

This is where the next quarterback domino falls in this draft as the Chargers are in need of a new franchise QB with Tyrod Taylor in place for the time being. Herbert has across-the-board plus traits including his size, arm strength, mobility and intelligence which all point to a potential franchise leader for the Chargers for years to come. – Varty

Panthers start to rebuild their team from the trenches out. Brown has the strength to dominate inside and will make his presence felt right away. – Zanchetta

Kyler Murray pretty much has the AZ offence on lock, and so putting in a defender like Wirfs to protect him seems more than reasonable. He is easily the best OT in this draft, and Iowa has been ruining perfect seasons like it’s their day job so I’m not shocked they produced such a talent. – McGoldrick

Jacksonville needs to rework their defensive line with the departure of Calais Campbell and Yannick Ngakoue seeming to want out. Kinlaw impressed at the Senior Bowl and the Jags took notice. – Zanchetta

Do I believe that Baker Mayfield will bounce back? Absolutely. So what’s needed on this Browns roster? They need talent on the defensive side of the ball and if Simmons is available at number 10 then the Browns should not hesitate to run up on the stage (or phone) and select the freak of nature out of Clemson. – Varty

Sam Darnold really deserved better than ever having to get drafted by the goddamn Jets, so at least giving him some sort of protection before he gets sacked 20 times in one game and gets a head injury that will leave him out longer than mono did. – McGoldrick

Antonio Brown’s unruly departure from the Raiders left a massive hole in their offence that Tyrell Williams and Darren Waller couldn’t entirely fill. With their pick at the entire litter of WRs, look for them to take the consensual favourite at the position. – McDonald

Hot take that Jimmy Garapolo is overpaid and the Niners should be looking to get rid of him in the near future. I think Love would make a good fit in their offense that really doesn’t need much work. – McGoldrick

With adding the future Hall of Famer Tom Brady in the offseason the Bucs need to shore up an offensive line which struggled at times protecting the passer. Thomas, a three-year starter at Georgia, is a rock-solid left tackle with a no-nonsense approach to the position. With Brady being strictly a pocket passer Thomas would be a great pick to protect Brady’s blindside. – Varty

The Broncos seemed to find their guy in Drew Lock, now they give him another fast weapon to go with Courtland Sutton and Noah Fant. – Zanchetta

As Desmond Trufant departs, the Falcons are lacking on the back end of their defence. Head coach Dan Quinn knows the importance of coverage in this day’s NFL (and especially in the NFC South), so look for him and his team to take one of the best cornerbacks available. – McDonald

The Cowboys lost two starting members of their secondary and need to get cheaper and younger. McKinney can play multiple positions and will help their needs. – Zanchetta

Again, the Dolphins are crying for help. Screaming. I literally don’t understand what deal with the devil they have that they can go 3-10 and still beat the Patriots in December but their defence also needs so much help. So much. Queen may be the best LB in the draft, but teams have needs! – McGoldrick

Who knows what will happen with Mayock and this draft. Corner could very well be the choice here but I believe the top corners are already gone off the board. For this reason the Raiders take the best pass rusher who is available, one that can provide consistent pressure on opposing quarterbacks. By also being able to drop into coverage as well, Chaisson can be a jack of all trades for the Raiders. – Varty

Again, Jacksonville needs help in pretty much everything except their special teams. Adding one of the best available OT’s in the draft to protect Gardner Minshew isn’t a bad idea. – McGoldrick

This pick is as simple as this, the Eagles need wide receivers and this is the best man available. In Jefferson the Eagles get a sure-handed, fast route-runner who has the week one skills to start opposite Alshon Jeffery. – Varty

Minnesota needs to get a lot cheaper on the defensive side of the ball and Gross-Matos’ ability to play the run and get after the quarterback allows flexibility in the Vikings system. – Zanchetta

With the uncertainty of the QB positon this pick very well could be Jordan Love but the front office seems to be okay with running with Jarret Stidham going into the year. With that, the Patriots upgrade their defence with some versatility. The former Hawkeye wins with a blend of power, length, technique and heavy hands and has the versatility to rush from the inside as well. – Varty

The Saints added depth at the WR position with Emmanuel Sanders, but now that Drew Brees has essentially solidified a two-year window to win, they need to take advantage of that. Drafting a big-bodied receiver like Higgins could boost the already strong aerial attack. – McDonald

After grabbing a pass rusher a few picks before, now they get a plug and play tackle to secure the pocket around Kirk Cousins. – Zanchetta

I am giving this man the BENEFIT! He doesn’t really deserve to go this high and playing in the Big 12 is basically like playing junior varsity because defence doesn’t exist in that conference but Miami needs help on all fronts so they can at least try to develop something out of this guy. – McGoldrick

With this pick the Seahawks select one of the youngest players in the draft at only 20 years old. Jackson may be raw and probably should have returned to USC but his potential is too much for them to pass up. He has the quick feet and athleticism that could entice the Seahawks to take a chance on his long-term abilities compared to how he is right now. – Varty

Eric De Costa grabs the next man of the middle for the franchise. Murray is a heat seeking missile who will shoot gaps to break up plays early and often. – Zanchetta

The Tennessee defense is lacking more than their offense so adding a solid CB would do them some good. Mike Vrabel clearly knows what he’s doing with the team so I believe he can easily find a fit for this man. – McGoldrick

Mims is a big, fast receiver who can split safeties down the field and make plays with the ball in his hands. At 6’3″ and 207 pounds with 4.38 speed he gives Aaron Rodgers a receiver that he has not had in years that has big play ability. – Varty

As we all saw during the Super Bowl, the 49ers struggled in coverage. Richard Sherman was still a second-team All-Pro last season, but he isn’t getting any younger. Drafting someone like Diggs can spruce up this coverage unit and can help this already elite-level defence even more. – McDonald

The Chiefs are severely cap-strapped after their Super Bowl run and they need help on the defensive end. They might look at Baun, who some analysts believe will move from the edge to an off-ball linebacker position. Providing that sense of versatility is something that DC Steve Spagnuolo’s defence may covet. – McDonald